The two major players when it comes to app stores are definitely the Apple App Store for iOS devices and the Google Play Store for Android devices. To get your app found by more users great App Store Optimization (ASO) strategies need to be put into practice for both of them. However, you have to pay close attention. These two app stores take into account different factors for ranking the apps. So what are the differences? We at App Radar got you covered. Keep reading to find out how you can better optimize your apps for the Apple App Store and the Google Play Store.

Keywords: How important are they really?

Keywords are one of the most important ASO factors that gets your app showing up in relevant search results. Keywords are utilized by both the Apple App Store's and the Google Play Store's app store algorithm when indexing and ranking apps.

Keywords for the Apple App Store

The Apple App Store gives you a specific keyword field where you can manually add the keywords you want to target. The algorithm also looks at keywords from the category your app is in and competitor apps.

There are other fields where you can include your keywords. One of the most important ones for the Apple App Store search algorithm is the app name. Unfortunately, way back in 2017, Apple shortened the App Title to just 30 characters. The good news is, however, that Apple then added the Subtitle field, which is also considered in the app indexing process. The subtitle can be up to 30 characters long. Because you're limited with available indexable keyword text you should not repeat keywords within any fields for the Apple App Store. You should also not input singular and plural forms of the same words, Apple is already smart enough to figure this syntax out on their own.

Keywords for the Google Play Store

Appearance Matters: How Users See Your App in the Search Results

ASO is not only about getting users to find your app through search. The right ASO strategy will also convince users to download your app. A big factor of whether or not a user will download your app is how your app looks within the app stores. Afterall, a majority of users make their decision to install an app on first impressions.

Both, the Google Play Store and App Store, display the following app information in the search results pages:

When available, app preview videos are also shown right away in the first vertical/horizontal slot. In addition, the search result page shows practically 2 full app results simultaneously. This means a user will always be initially looking at your app alongside another. So with the Apple App Store, you want to ensure that your app preview screenshots or videos show the main functions of your app and that the details of the app preview screenshots are clearly visible on a small scale. 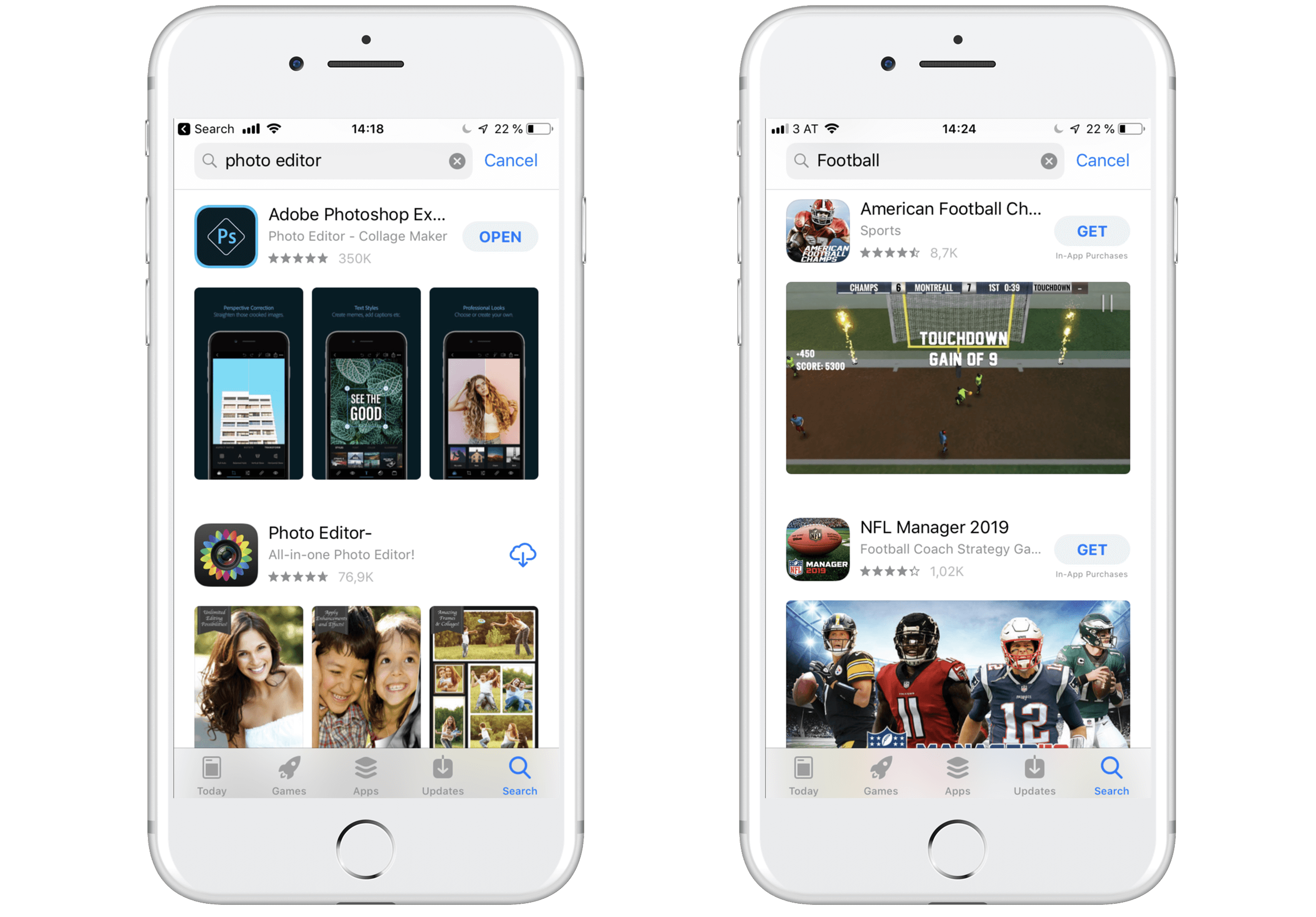 The Google Play Store gives you a lot less to work within the search results than the Apple App Store does. Android users who are browsing through or searching more general keywords, see a list of apps they can choose from. Each search result contains only the app icon, app title, developer name, and average star rating. To entice potential users to click into your app's store listing, make sure that your app title is clear, descriptive and short. Pick a title that lets the user know what your app is about right away. There's no time to play guessing games around here. 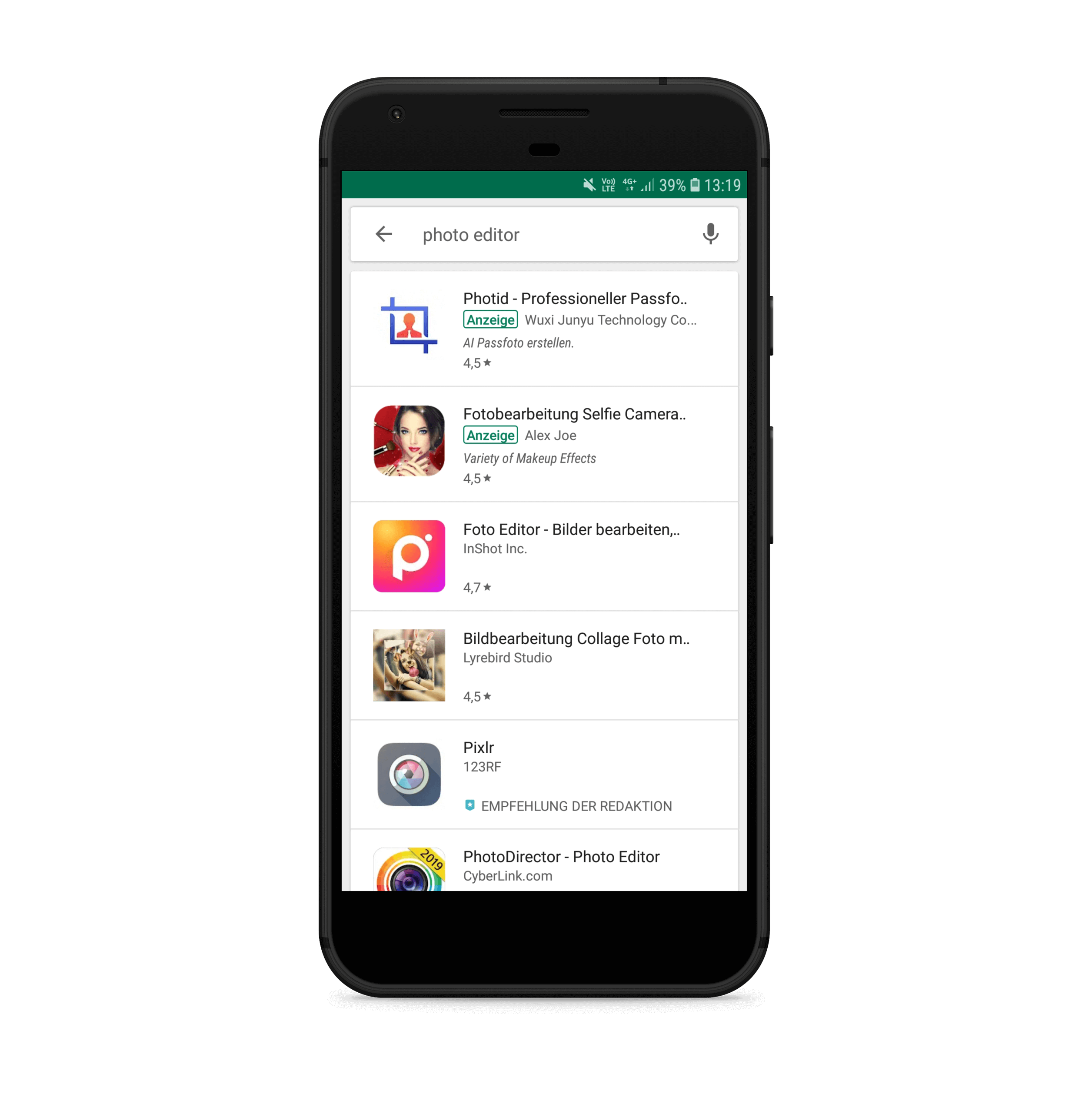 App Store Listing: Getting those Downloads to Roll In

Visuals are highly important for both the Apple App Store and the Google Play Store.

The Google Play Store recently updated its app store listings. The listings no longer show a featured image. Users now see the average star rating, number of downloads and suggest age for use. The app preview screenshots are more visible right away.

Both the Apple App Store and the Google Play Store display average star ratings on an app page. User satisfaction is definitely no trivial thing. You should work towards releasing updates that fix not only bugs known to you and your developers but problems that users are reporting through reviews. Regularly going through your app's user reviews on the app stores gives you a great overview of what areas to focus on when you are making updates to your app. Just like you wouldn't want to make reservations in a hotel with bad ratings, users are not going to want to download an app with bad ratings.

Additionally, ask your current users to leave reviews of your app. Have an in-app option for your users to share your app with their friends. The algorithms of both app stores favor apps with higher amounts of (good) reviews/ratings and higher amounts of installs as well. Always remember to get your users to enjoy your app, to review it, and to share it with friends! 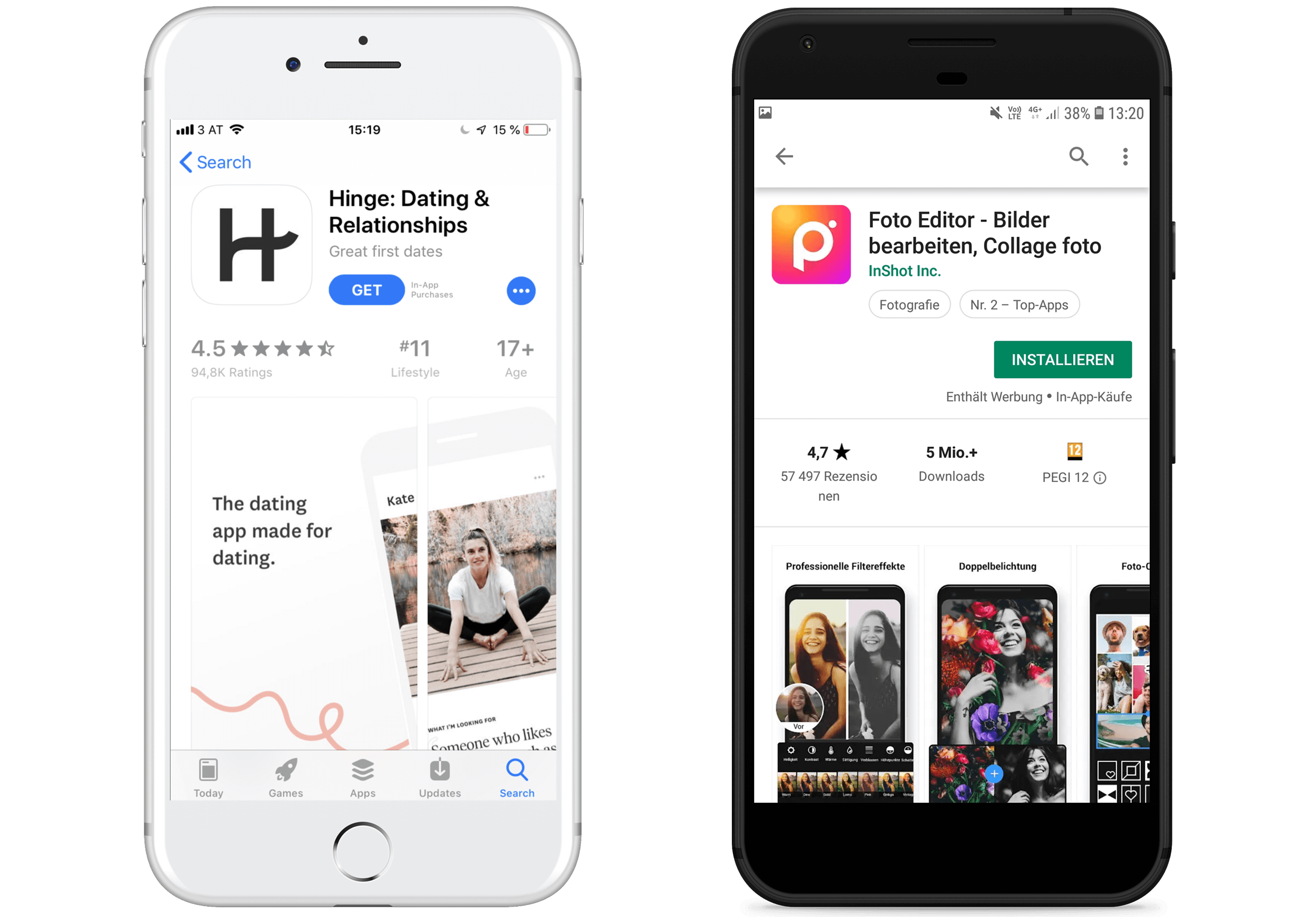 In summary, ASO, when put into practice correctly and effectively, can make a big difference in your app's search exposure and install rates. Be aware that the Apple App Store algorithm indexes different factors than the Google Play Store does. As a result, going through your app and optimizing it specifically for each app store is crucial for your app's success. The figure below shows the main differences in ASO when it comes to the Apple App Store vs. the Google Play Store. 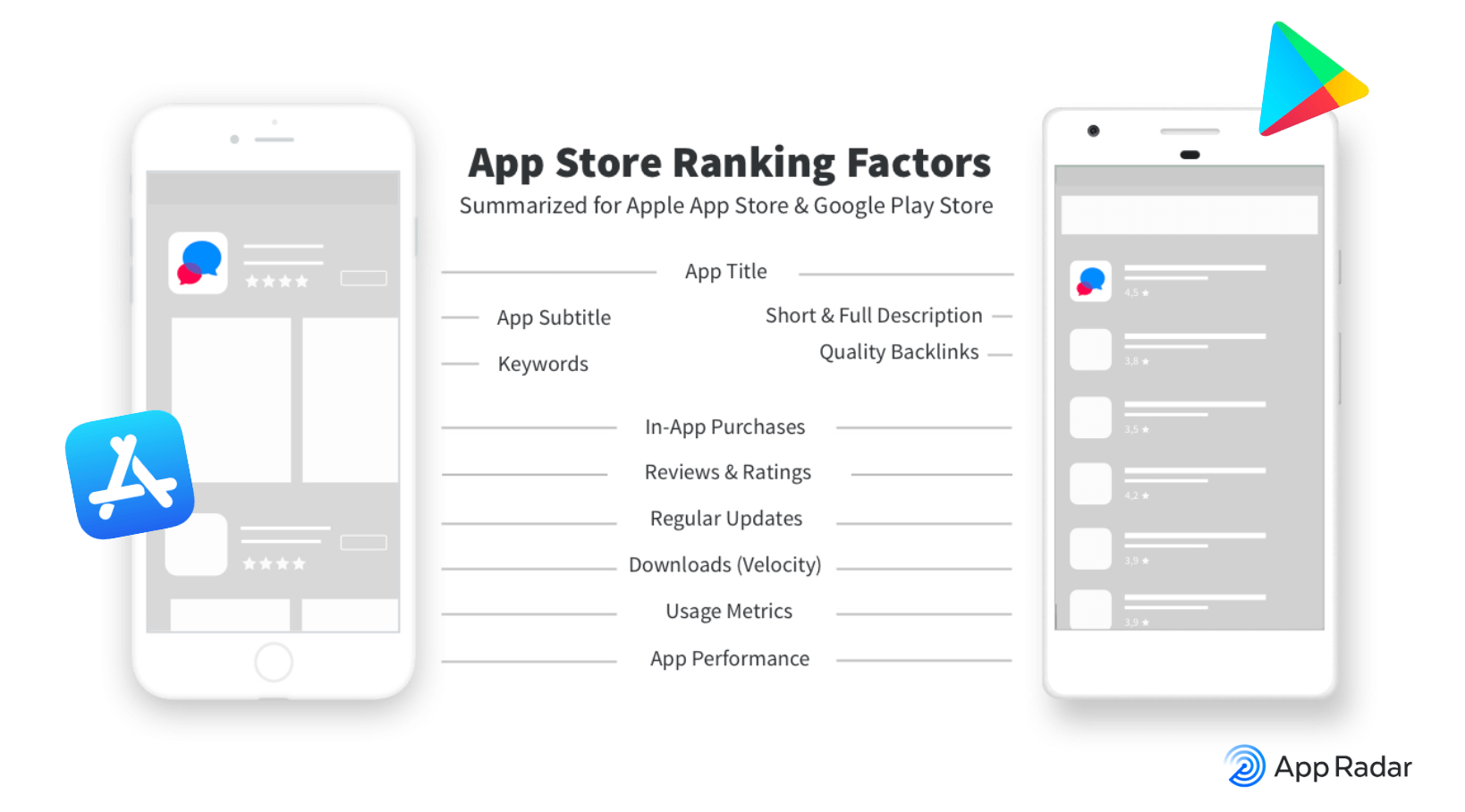 Need more help with App Store Optimization (ASO)? Check out App Radar's ASO Academy. They go step by step through all the ASO foundations and will be releasing more in-depth ASO guides soon! 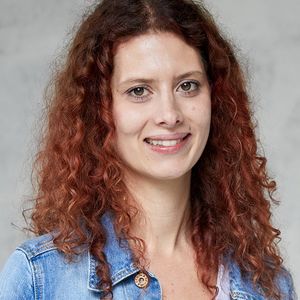 Maja is a trained translator who loves playing with words and has a strong affinity for online communication. She is a loyal supporter of the Start-up scene and currently on a mission to explore the world of digital marketing & ASO at App Radar.

Stay up-to-date with our articles, news, events and more